Sony has unveiled a host of new products at CES 2018. One of the major launches has been the 4K Ultra Short Throw Projector (LSPX-A1) priced at $30,000 (roughly Rs. 19,12,000). Sony has also announced the MP-CD1 mobile projector that ‘fits in the palm of your hand’. Also on display was the CCB-WD1, a new Camera Control Box that expands the functionality of RX0 cameras. Additionally, Sony has also revealed its efforts in audio, with a Dolby Vision Blu-ray player and a Dolby Atmos Enabled Speaker. Also, in the automobile sector, Sony has announced its new automotive image sensors and a new in-car audio system.

LSPX-A1 will be available in the US later this year, and the price will be around $30,000 (roughly Rs. 19,14,100). The company says, “With the engineered marble top, half mirror finished aluminium frame, and wooden shelf, the LSPX-A1 enriches your living environment while complementing its decor.”

Sony MP-CD1 Mobile Projector
Sony’s new ultra-portable MP-CD1 Mobile Projector can project content up to 120 inches in size from a distance of 3.5 metres. It weighs 280.66 grams and can instantly transform any surface into a widescreen, the company said. With Texas Instruments DLP IntelliBright technology, the projector is able to boost brightness with the same battery consumption, Sony claimed.

The MP-CD1 can project an image of up to 105 ANSI lumens and 854×480 pixel resolution. It comes with a 5000mAh built-in battery and it uses USB Type-C for charging instead of a proprietary AC adapter. In terms of dimensions, the device is 83.0 mm x 16.0 mm x 150.0 mm. The projector comes with a standard tripod socket, an HDMI port, and a USB port for charging a streaming device (like a Chromecast or Fire TV Stick) while turned on.

With the new feature, setting in RX0 cameras and camera control boxes can be changed simultaneously. The cameras can also be set to all start or stop recording at the same time. Also, there is a video sync function that enables frame timing to synchronise between cameras frame by frame. The company has also updated its PlayMemories Mobile app to version 6.2 which expands the multi-camera control capabilities when paired with the RX0. 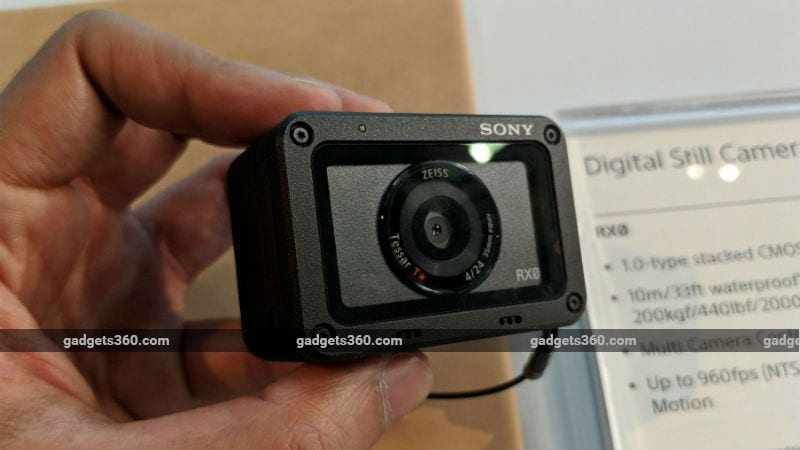 Sony Dolby Atmos Enabled Speakers
Sony has added new SS-CSE Dolby Atmos Enabled Speakers to its CS-Series speaker lineup. These speakers are designed to be placed on top of the SS-CS3 floor standing speakers and SS-CS5 bookshelf speakers. They have a compact, angled design and up-firing drivers. They reflect sound off a ceiling that simulates overhead audio effects used on Dolby Atmos and DTS:X soundtracks, Sony says. The speakers feature an MDF cabinet, 10cm full range speaker system, a Mica Reinforced Cellular cone, a Maximum Input Power of 100W per channel, and a frequency range of 70Hz-32000Hz. The pricing of the Sony’s SS-CSE Dolby Atmos-enabled speakers has not been announced yet, but are set to later this year. 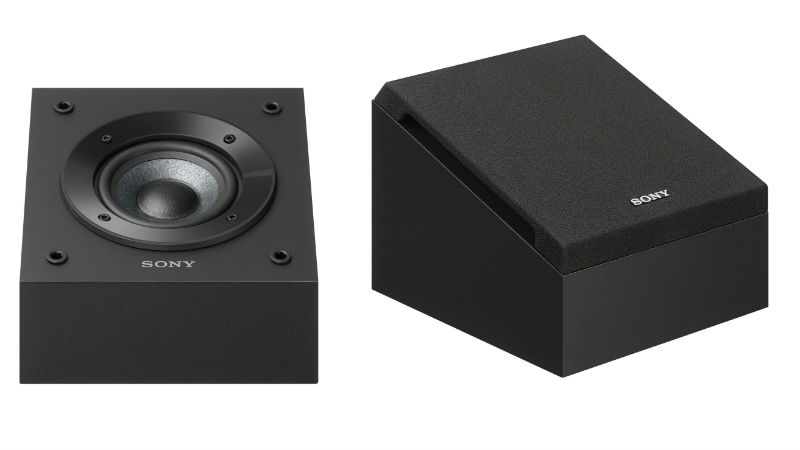 Sony Dolby Vision Blu-ray player and Dolby Atmos receiver
Sony has announced its First Dolby Vision Capable UBP-X700 4K Ultra HD Blu-ray Player and the STR-DH790 7.2ch Dolby Atmos 4K HDR AV Receiver to provide big screen picture and sound. The UBP-X700 has been designed for 4K Blu-ray discs with either HDR10 or Dolby Vision. It features inbuilt apps for Netflix, Amazon Prime Video, and YouTube. Sony has extended its home theatre selection with the new STR-DH790 Receiver. The STR-DH790 receiver can pass through both HDR formats without any loss in the signal. The pricing for the Blu-ray player and receiver are not available yet, but they will ship in later this year.

Sony XAV-AX5000 In-Car Audio
Sony has introduced new XAV-AX5000 In-Car Audio which comes with enhanced smartphone Connectivity, OE integration, and upgraded sound quality. The company has introduced a new head unit with a 6.95-inch capacitive display, Apple CarPlay, and Android Auto. Sony has designed the new in-dash receiver to save space. The company says, “The rear chassis is designed with single-DIN dimensions that give enough room to store connected cable harnesses, steering wheel control adopter, and more.” Meanwhile, the new head unit is ‘Rear Camera Ready’, that automatically shows the camera’s feed on that big screen when a user shifts into reverse. The price of the XAV-AX5000 has not been revealed yet, but it will be available later in 2018. 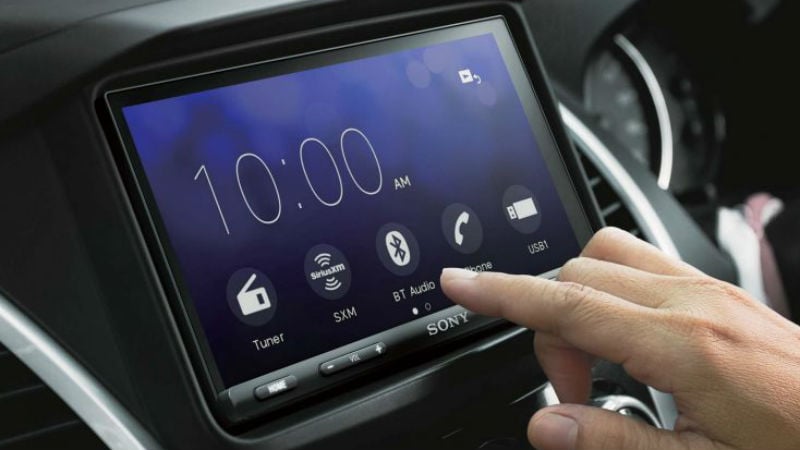 Sony automotive image sensors
Sony has announced that it would commercialise image sensors for automotive use. At CES 2018, Sony showcased further efforts in image sensor technology that gives vehicles evolved vision for autonomous driving. The company showed sensors that detect their 360-degree surroundings (“Safety Cocoon”), even under backlit or unlit conditions. It also showed how wide-angles, telescopic zoom, high speed and high sensitivity images captured with the new image sensors differ from what is seen through a naked eye.

Sony announced the commercialisation of the IMX224MQV CMOS image sensor for automotive cameras. Sony says it has the highest sensitivity level in the world as it is capable of capturing high-resolution colour images even in light conditions as low as 0.005 lux. Sony also announced that it has acquired a Belgium-based company, Softkinetic Systems, which develops time-of-flight image sensor technology for distance detection.