The A6400 has a number of features that are being added to Sony’s higher-end camera models.

The Sony A6400 boasts a new 24.2-megapixel Exmor Advanced Photo System type-C (APS-C) sensor powered by Sony’s new Bionz X image processor. It can shoot stills at an impressive 11fps when using the mechanical shutter or up to 8fps when shooting in the silent mode. Continuous autofocus and auto-exposure tracking work when shooting in the high-speed continuous mode, and you can capture up to 116 JPEG images or 46 in uncompressed RAW format before the camera’s buffer fills up.

Sony A6400 comes with a tilt and swivel display.
Photo Credit: Sony

Its highlight feature however is the camera’s ‘real-time eye AF’ that uses AI to continuously detect the subject’s eyes. This works with multiple subjects as well as animals, keeping everyone in the frame in focus. You also have the option to manually select the eyes you want to track if you’re shooting in a crowd. Real-time subject tracking also detects depth, colour, pattern, and other spatial info to accurately follow your subject around the frame.

There’s also support for 4K 30fps video shooting, which utilises the camera’s full sensor for the best results. In 1080p you can shoot at up to 120fps. It supports HDR video recording as well with HLG support. The touchscreen tilt and swivel display can turn all the way around in case you’re interested in taking a selfie or want to record a video blog.

Sony also reportedly announced that it’s bringing the AI-powered eye and subject tracking and animal eye AF tracking features to its higher-end models, namely the A9, A7R and A7 III. 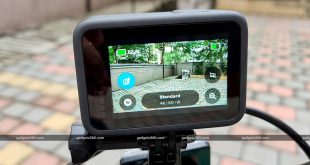