Samsung Galaxy View 2 has officially been revealed by US telco AT&T, and its price and release date have also been confirmed. The tablet sports a 17.3-inch display, 64GB inbuilt storage, a 5-megapixel web camera, and a massive 12,000mAh battery. It will be priced at a collective cost of $740 (roughly Rs. 51,900) and will be available online as well as offline. The Samsung Galaxy View 2 comes with LTE support, has upgraded specifications, quad speakers, and a new kickstand design. It also features quad speakers with Dolby Atmos sound technology support for better sound output.

The Samsung Galaxy View 2 is priced in the US at $740 (roughly Rs. 51,900), and will be available both online and offline from April 26. AT&T will offer a ‘Next’ instalment plan for 20 equal monthly payments of $37 (roughly Rs. 3,000). There is no word on when Samsung plans to launch the tablet in international markets. The pricing and release date of the Galaxy View 2 were reported first by Droid Life, and have been confirmed by AT&T to Engadget.

In the AT&T teaser video, the Samsung Galaxy View 2 is seen to sport sufficient bezel on all sides of its large display. The handle that was seen at the back of the Galaxy View is now gone, and the kickstand instead dons an oval-shaped hole that can also be used for gripping the tablet.

The Galaxy View 2 runs on Android 8.1 Oreo, features a 17.3-inch full-HD+ (1080×1920 pixels) display, and is powered by the Exynos 7884 octa-core processor. The tablet packs a 3GB RAM and 64GB internal storage option. Storage is expandable up to 400GB using the microSD card slot. There’s a 5-megapixel front camera as well for video calls, and a massive 12,000mAh battery to keep the lights on.

There’s also access to DirecTV Now streaming and AT&T NumberSync for receiving and making calls with the help of LTE support. The dimensions of the tablet measure at 263.3×417.068x 17.2mm. The AT&T teaser revealing the specifications of the Samsung Galaxy View 2 can be viewed below.

To recall, the original Samsung Galaxy View tablet was launched in October 2015, and it features an 18.6-inch display, sports dual 4-watt speakers, and a 5700mAh battery. 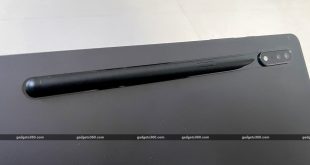