Panasonic on Tuesday launched the Lumix G7 and Lumix G85 digital single lens mirrorless (DSLM) cameras in India. While the Panasonic Lumix G7 comes at Rs. 53,990, the Lumix G85 carries a price tag of Rs. 72,990. The Lumix G7 also comes with a dual kit option of 14-42mm and 45-150mm at Rs. 58,990. Both new models offer 4K video recording and have features such as Post Focus and Dual-Image Stabilisation. The cameras available for purchase through all Panasonic stores across the country.

The Panasonic Lumix G7 comes with a 16-megapixel Digital Live MOS sensor that supports a maximum sensitivity of ISO 25600. The camera is powered by a Venus Engine that has a quad-core CPU and is touted to deliver high-speed signal processing resulting in 8fps (AFS)/ 6fps (AFC). Further, there is a 3-inch free-angle rear monitor that has a 1040K-dot resolution. The camera supports video recording at QFHD 4K resolution with 3840×2160 pixel count in MP4 format. You can also leverage the built-in burst mode to capture images at a speed of 30fps and in 8-megapixel equivalent resolution.

Panasonic has provided a drive mode dial on the Lumix G7 that comes in addition to the traditional front and rear dials. The drive mode dial is specifically designed to let you quickly activate 4K photo mode. The camera also has Wi-Fi connectivity and a 3.5mm microphone jack. Besides, you can find features such as Focus Peaking, Creative Controls with 22 Filters, and Time Lapse Shot/ Stop Motion Animation.

The Panasonic Lumix G85, on the other hand, is a rugged-design mirrorless camera, sporting a front structure composed of a magnesium alloy. The build of the camera is dust- and splash-proof. On the top, there is a 16-megapixel Digital Live MOS sensor without Low Pass filter with a maximum sensitivity of ISO 25600. The camera is powered by a Venus Engine that supports 4K video in 3840×2160 pixels at 30p/ 25p (50Hz), 30p (60Hz), or 24p in MP4. Also, there is a five-axis Dual IS (Image Stabiliser) that is claimed to enable a robust and effective blurring suppression. 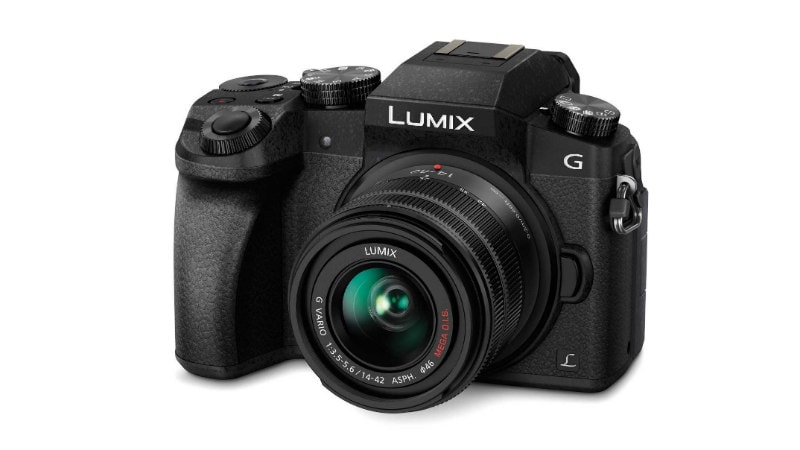 The Lumix G85 has a Light Composition feature under the 4K Photo mode to enhance the lighting in low-light shots. Additionally, there is an integrated Focus Stacking feature that enables the adjustment of the depth of field after shooting by combining multiple images shot with the Post Focus function. The camera also has a preloaded 4K live cropping feature in video recording. Furthermore, there are features such as RAW data development in Camera, Multiple Exposure, and Time Lapse Shot/ Stop Motion Animation. The camera has a 3-inch 1040K-dot touch-control monitor and an OLED LVF (Live View Finder) with a 2360K-dot resolution in approximately 1.48x/ 0.74x (35mm camera equivalent) magnification capability.

“The new Lumix G7 and G85 target the new-age videographers and photographers, who are upwardly mobile and are willing to join the 4K revolution,” said Gaurav Ghavri, Product Head- Digital Imaging, Panasonic India, in a statement. “Designed for all DSLM professionals, these cameras are an answer to a professional, 4K photography and videography that ensures memories for life The compact form, packed with innovative technology with Dual-Image Stabilisation and Focus Stacking function that enables users to adjust the depth of field after shooting by combining multiple images shot with the Post Focus distinguishes them from the pack. Set to transform the DSLM segment, we see a huge potential for Lumix G series in India.”

Sony on Monday expanded the SF-G Series with the launch of the new UHS-II SD ...