Indian wearables and accessories maker Noise has a new action camera in the market, called the Noise Play 2. We tested the company’s debut action camera back in September, and it was alright for a first attempt, but what made it interesting was the price point. At roughly Rs. 5,000, you got an action camera that could also shoot 4K video, complete with basic accessories.

The second-generation model boasts of a bigger battery, a touchscreen, better build quality, and RAW image support, to name a few features. These improvements also result in a much higher price tag, nearly double of what the first version sold for, but still a lot less than GoPro’s most affordable offering. We’ve been using it for a few weeks, and here’s what we think of it.

The Noise Play 2 ships in a much smaller box than its predecessor did, and that’s primarily because you don’t get any of the accessories with it. In the box, you get only a charging cable, manual, warranty card, and the battery. The accessories are sold separately and you can choose between various combos on the Noise website. We also received the ‘Accessory Box’ from Noise, which sells for Rs. 2,500 and includes an assortment of add-ons such as a bike mount, adhesive mounts, tripod mount, and a waterproof housing, in a compact case.

The build quality of the Play 2 is improved compared to its predecessor. The body is still made of plastic but the finish and quality are much better. The plastic is also stiffer so it doesn’t flex when pressed. Sadly, there still isn’t any protection for the ports so you’ll have to be careful when using this device without the waterproof housing. We’re not expecting an IP-rated enclosure at this price but a simple rubber flap at the very least would be good.

The Play 2 supports microSD cards (up to UHS-1 class) of up to 128GB. There’s also a Micro-HDMI port and a proprietary data port which the company describes as Mini-USB, but does not work with standard Mini-USB cables. The latter is a bit of weird choice, considering that pretty much every company now uses standard Micro-USB or the newer USB Type-C. 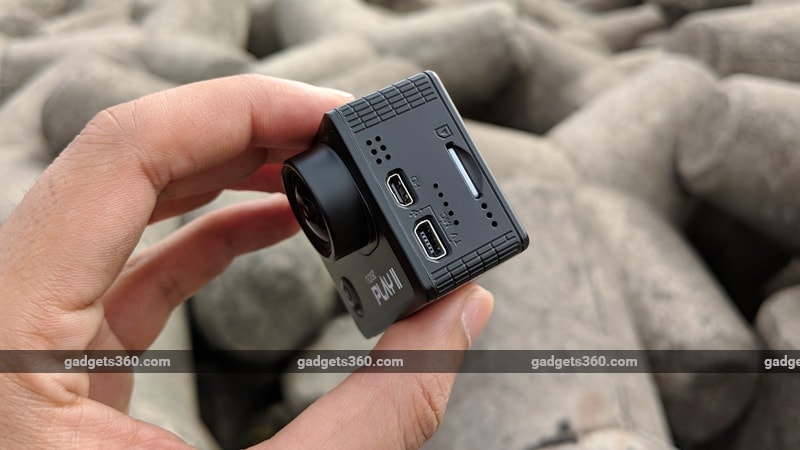 The camera has only two buttons now, since the rear 2-inch display supports touch input. The downside to this is that you can’t interact with the menus when the camera is inside its housing. The buttons have good tactile response. There’s a provision for a tripod mount on the bottom, which we like. You get three red LEDs, which are placed around the camera, however the one above the display isn’t very bright and is tough to see in daylight.

The Noise Play 2 boasts of a 16-megapixel sensor with an f/2.8 aperture wide-angle lens. There’s a removable 1200mAh battery, which is slightly larger than the one offered before. The Noise Play isn’t waterproof, so you’ll need to use the optional housing which lets you take it to depths of 30m. It supports 4K video recording at up to 30fps in NTSC mode. There’s also burst shooting, WDR (wide dynamic range) for videos, slow motion, and the ability to manually set various exposure parameters such as sharpness, white balance, metering, colour, contrast, etc. 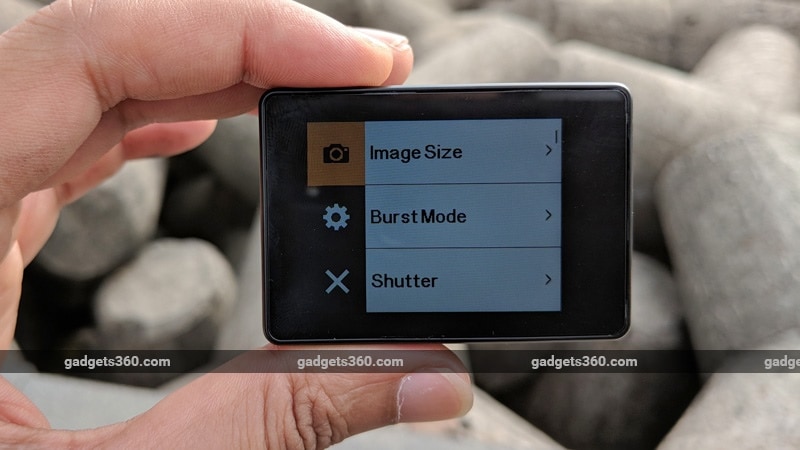 The Play 2 has in-built Wi-Fi, which lets you sync it with a companion app that’s only available for Android at the moment. However, when Wi-Fi is on, you can’t record video or interact with any of the menus, like you can with GoPros. The Android app isn’t the prettiest in terms of design but is functional and lets you review your recorded footage, change settings, and operate the Noise 2 remotely.

The menu system is easier to navigate now, thanks to the touchscreen. Swiping downwards brings up toggles for Wi-Fi, display lock, exposure lock, stabilisation, and power. You can switch between video and photo modes by swiping from right to left on the viewfinder. The touch response is decent most of the time, but we did encounter some intermittent glitches when it simply refused to register input correctly. The touchscreen attracts fingerprints easily and washes out under sunlight.

Video quality has gotten slightly better, when compared to the previous model. Light metering is still a bit hit-or-miss, and bright skies continue to look overexposed when shooting in daylight. Objects that are correctly exposed exhibit good colours. At 1080p 60fps, the framerate is solid and the footage looks very good. We found the stabilisation to work decently well too. Videos shots at 4K however appear grainy, and the stabilisation introduces some ‘shimmery’ anomalies in the footage. One of the main reasons for the poor low-light performance is the lens, which has a much narrower f/2.8 aperture compared to the f/2.2 aperture of the previous version.

The level of detail is good, provided there’s adequate natural light around. You get various resolutions to play with, ranging from 4K to QHD, full-HD, and even VGA. The Noise Play 2 can shoot 120fps video at 720p. If you want an even higher 240fps framerate, then you’ll need to drop the resolution to 640×480. 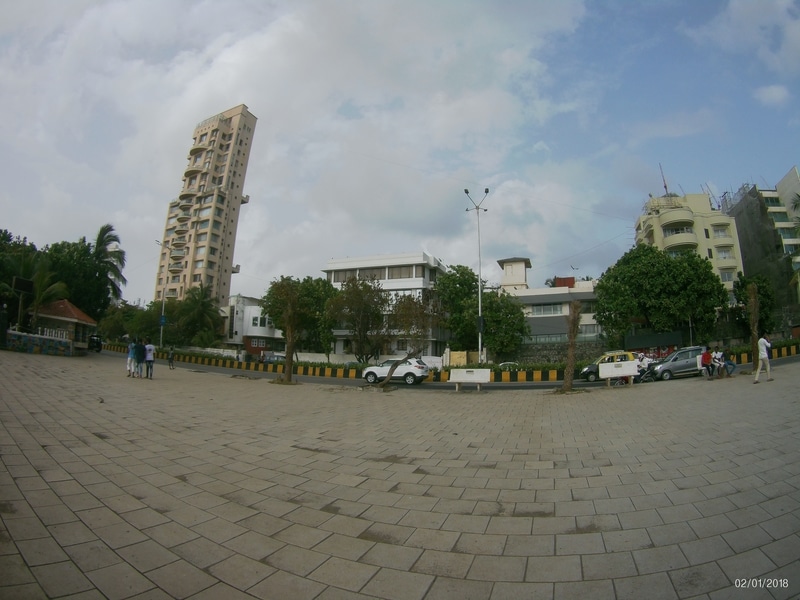 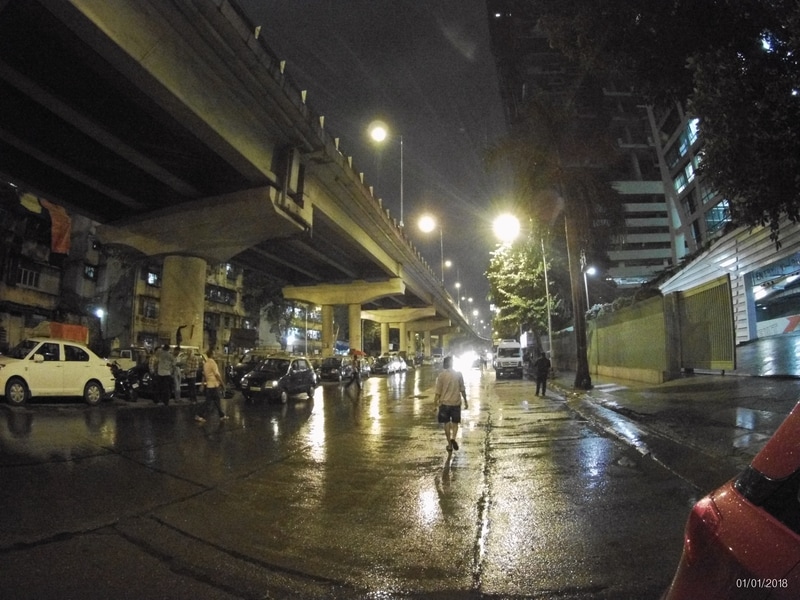 Additional video modes include zooming; looping, which lets you use the camera as a dash-cam for your car; timelapse with a choice of different intervals; and bike mode, which simply enables stabilisation. There’s a ‘Motion Detect’ toggle that automatically starts recording when motion is detected, which could come in handy for surveillance.

The camera isn’t very good with still photos. In the test shots we took, we noticed a lot of barrel distortion, grainy details, and subdued colours even when shooting in daylight. You can change the resolution and aspect ratio but there’s no way to adjust the field of view. Burst mode lets you capture 10 images per second, which is not bad. You can even play around with the shutter speed to get better low-light shots. Speaking of low light, the Noise 2 defaults to a slower shutter to try and capture better details, due to which it takes a second or two before each photo is actually saved. Despite this, the end result looks noisy and there isn’t very good dynamic range.

The Play 2 runs slightly hot, especially when used with its waterproof housing. The 1200mAh battery managed to last for 1 hour, 51 minutes when shooting 4K video which is good. The battery takes about two hours to charge fully, when using a high-wattage power adapter.

Verdict
The Noise Play 2 improves upon its predecessor in certain areas such as build quality and battery life. It also gets a touchscreen and some of the video quality issues of the previous version have been addressed. However, it also takes a few steps backwards. The narrow aperture isn’t of much use in low light. The decision to go with a proprietary USB port instead of Micro-USB or even Type-C is strange, and means that you need to be very careful with the included cable. We’re also not big fans of the exposed ports and slot. On top of all that, the bundle is also pretty sparse now.

Despite this, the Noise Play 2 is priced considerably lower than the most affordable GoPro with a touchscreen, which is the new GoPro Hero. If you want an action camera for casual use, the Noise Play II offers plenty of features.