When completed, a 110-kilometre radio link from King Island back to Victoria’s Surf Coast will be the longest such link over water in the Telstra network, the company said on Friday.

The new link is part of a AU$9.8 million connectivity upgrade for King Island that will see the island get a six-fold improvement in bandwidth.

The project will see two new mobile sites, two new small cell sites, and LTE upgrades at another three sites, as well as 37 kilometres of fibre laid on the island.

Money for the upgrade was coughed up by Telstra, King Island Council, Tasmanian government, and the Commonwealth’s Regional Connectivity Program (RCP).

Last week, the government announced it had selected 81 sites for its Regional Connectivity Program, but did not name them.

When announcing the upgrade on Friday, Communications Minister Paul Fletcher failed to acknowledge the presence or monetary input of anyone not in the federal government.

Revealing a touch more information on some of the successful RCP sites, the minister said AU$8 million of the fund was earmarked for five projects in Tasmania: Improving bandwidth to nine regional schools; a connectivity upgrade in Geeveston; improving mobile coverage in Jericho; and a connectivity boost at Greenhill Observatory to “enhance Australia’s sovereign space capability”.

Work is due to start on the King Island project before the year is out.

Earlier in the week, Telstra announced its Adapt S1 product, which combines VMware SD-WAN with a Palo Alto security platform. Telstra said the product uses its core network to improve redundancy and security.

“With more data flowing to mobile offices and workers, Adapt S1 can secure the corporate WAN in one seamless solution.”

Telstra and TPG spend hundreds of millions on mmWave spectrum

New holding company with debt cross guarantees, with international arm proposed as part of the Telstra shake up.

After performing 5G testing of the low band spectrum since November last year.

In a bid to help local farmers manage the effects of weather and climate change, Telstra has partnered with the Queensland government and the Bureau of Meteorology on the project.

Meanwhile, Optus has launched Optus U micro-credentials program for staff.

Best security system in 2021: Secure your home or business 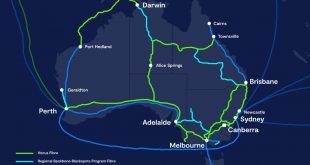 Vocus turning to sovereignty as its competitive advantage

Image:Vocus On Anzac Day, former cybermoat conjurer and secretary of the Department of Home Affairs ...