Huawei Watch GT has been launched in India. The new smartwatch by Huawei, which was unveiled back in October last year, will go on sale in the country through Amazon.in. starting March 19. The Chinese company has notably also brought the Huawei Watch GT Sports Edition as well as the Watch GT Classic Edition to the country with a starting price of Rs. 15,990. Alongside the smartwatches, the Huawei Band 3 Pro and Band 3e have also debuted in multiple colour options. The Huawei smartwatches run on the company’s LiteOS and will be available starting next week.

The Huawei Watch GT price in India has been set at Rs. 15,990 for the Sports Edition, while its Classic Edition is priced at Rs. 16,990. Both variants will go on sale through Amazon.in starting March 19.

Launch offers include Huawei Sport BT AM61 Earphones worth Rs. 2,999 that will be available to early bird customers along with the Huawei Watch GT. The smartwatch also comes with no-cost EMI options.

Alongside the Watch GT, Huawei has brought Band 3 Pro at Rs. 4,699. It will go on sale through Amazon.in starting March 26 and come in Obsydian Black and Space Blue colour options. The Huawei Band 3e will also be available for purchase through Amazon.in starting March 19 with a price tag of Rs. 1,699. It will come in Pink and Black colour options.

As we mentioned, the Huawei Watch GT was unveiled globally in October last year — in addition to the Band 3 Pro.

The Huawei Watch GT runs LiteOS and features a 1.39-inch OLED display (454×454 pixels) display along with a 326ppi of pixel density. Under the hood, there is a dual-chip architecture that is touted to enable 80 percent of power consumption, coupled with 16MB of RAM and 128MB of ROM. The smartwatch is also rated to deliver 14 days of battery life.

Alongside features specifically for fitness freaks, the Huawei Watch GT has a TruSleep 2.0 technology. The company claims that the proprietary technology helps identify common sleep-related issues and provides more than 200 potential suggestions for better sleep. The smartwatch is also capable of notifying users about new messages, calls, reminders, and alarms.

In terms of connectivity, the Huawei Watch GT has Bluetooth v4.2 and NFC. It is compatible with devices running Android 4.4 or later or iOS 9.0 or later.

The Huawei Watch GT measures 46.5×46.5×10.6 mm and weighs 46 grams. It comes with a dual-crown design that sits in addition to stainless steel and ceramic bezels. There is also a jade-like texture, and the watch is compatible with two band options, including a dual-colour silicone band and an elegant leather-rubber band. Moreover, the build of the Watch GT is water-resistant up to 50 metres.

Unlike the Watch GT that comes as a full-fledged smartwatch, the Huawei Band 3 Pro is available as a smart fitness band. It has a 0.95-inch (120×240 pixels) AMOLED clickable touchscreen display with a 2.5D curved glass protection. There is a metal frame along with a silicone strap. The smart band is capable of tracking sleep patterns using TruSleep 2.0 and monitors heart rate through the built-in infrared (IR) sensors. 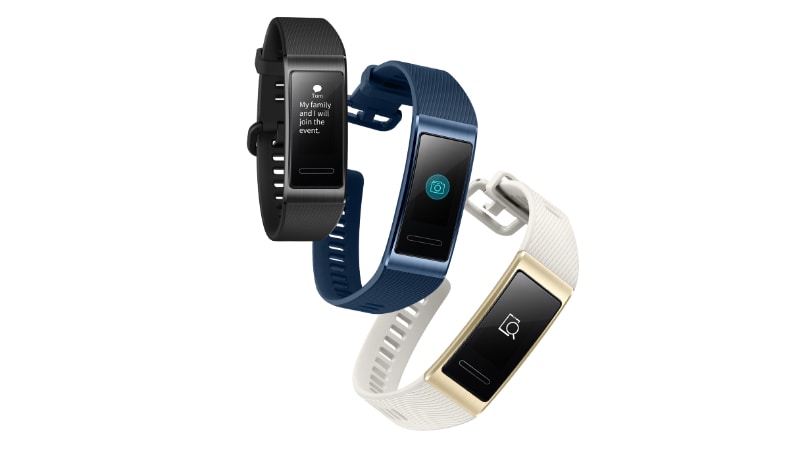 The Huawei Band 3 Pro is capable of providing incoming call notifications as well as giving the option to reject voice calls and preview new text messages. The OLED display of the fitness band can also be used as a remote shutter button.

Huawei has provided a six-axis accelerometer and a detached PPG cardiotachometer. The Fitness Band 3 Pro is also powered by an Applo 3 chip and supports Bluetooth v4.2 connectivity. Besides, it measures 45x19x11mm and weighs 25 grams.

To cater to the market of sports bracelet, Huawei has brought the Band 3e that comes with a Footwear Mode to offer precise running data tracking. The Band 3e also has 50m water-resistance. 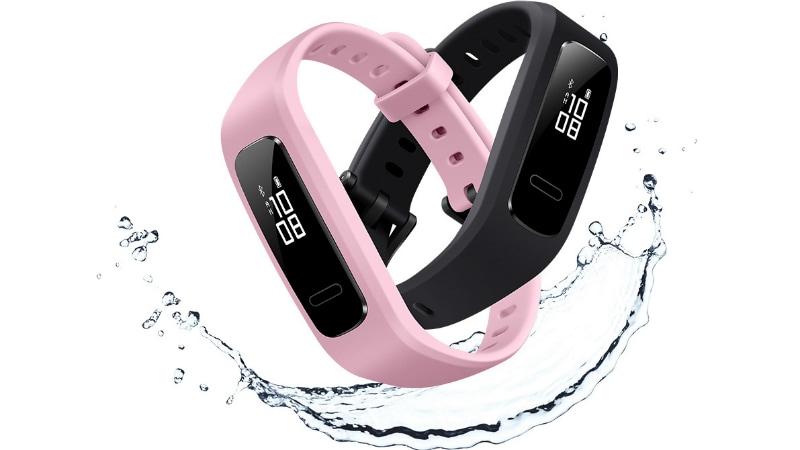 Furthermore, the Huawei Band 3e is touted to provide treadmill running data at an accuracy of 97 percent, using a built-in six-axis gyroscope based sensor.