Ahead of its launch next week, the Huawei P30 and the Huawei P30 Pro have leaked on the official site. The two phones were listed on the company’s site briefly, with Europe pre-order offers also revealed. The pages have now been taken down, but screenshots have already been shared by tipster Ishan Agarwal. Pre-order offers include a free Sonos One with both the phones, and an additional wireless charger with the Pro variant. The images also confirm that the P30 will sport a triple camera setup, while the P30 Pro will come with a quad-camera setup at the back.

Campaign and event teaser pages on Huawei’s own official consumer website went live briefly revealing all there is about the two phones, and also confirming all the past leaks that have been reported so far. Tipster Ishan Agarwal took screenshots of the pages before they were taken down. Huawei P30 is seen to sport a Leica triple rear camera setup at the back aligned vertically with 5x hybrid zoom support. The phone dons a waterdrop-shaped notch up front and is seen to sport gradient Blue, White, and Black colour options. Pre-order offers include a free Sonos One speaker.

The Huawei P30 Pro, on the other hand, is seen to sport a Leica quad camera setup with 10x hybrid zoom, including a Time of Flight depth sensor. It will come in an additional ‘Sunrise’ colour option as well. Pre-order offers on the Pro variant include a free Sonos One and a wireless charger.

A Vivocity Central Court event on April 6 in Singapore was also leaked, first spotted by tipster Evan Blass (archived). This page confirms the arrival of the Huawei Watch GT Active Edition as well. Details on the watch are still scarce, but it was listed as a launch offer product alongside the two phones. As per the event page, all Huawei P30 and P30 buyers will receive a free Huawei Watch GT Active Edition and a JBL Clip 2 Bluetooth speaker. This offer is listed to be only applicable to buyers who come for the roadshow on April 6 at Vivocity. 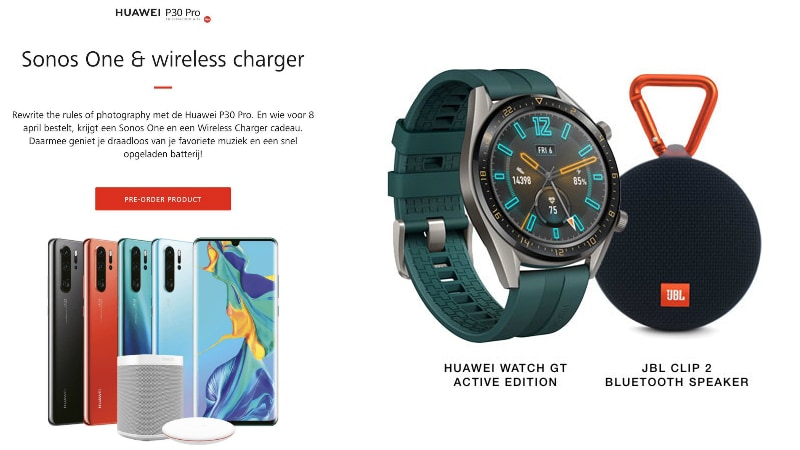 Separately, a video by Parker Walbeck shows off the camera capabilities of an ‘unreleased smartphone’ that is set to launch very soon. The video is a montage of a lot of unrelated scenes stitched together to form a musical video that boasts of high-quality video recording. Speculations are ripe that this ‘unreleased smartphone that Walbeck is talking about is the Huawei P30. Walback also notes that some footage has been shot using a 3 axis gimbal stabiliser, and that colour grading, speed changes, and sound design has been added in post-production for creative purposes. You can watch the video below.

A hands-on video of the Huawei P30 has also been leaked online on Weibo (re-uploaded on YouTube), and it shows the phone from all sides. The phone is seen to sport a waterdrop-shaped notch, a triple rear camera setup, a 3.5mm audio jack, a USB Type-C port, and a speaker grille at the bottom edge of the phone. The Huawei P30 sports the volume and power buttons on the right edge. You can see the video below.

Huawei is all set to launch the new phones in Paris on March 26. The pricing of the P30 Pro variant was leaked recently, and the 8GB version with 128GB of inbuilt storage carries a price tag of EUR 1,024 (roughly Rs. 80,000). The P30 Pro is also tipped to have a 40-megapixel primary sensor, 20-megapixel and 8-megapixel sensors (one of them a wide-angle while the other, a telephoto), and a TOF (Time Of Flight) sensor for gathering depth information. The P30 Pro will have a 32-megapixel selfie camera as well. Other specifications reportedly include the presence of USB Type-C, EMUI 9.1 based on Android 9 Pie, Kirin 980 SoC, 4,200mAh battery, and dual-SIM support. The P30 Pro will weigh around 191grams and measure about 8mm in thickness.