Huawei Enjoy 9S is all set to be unveiled on March 25 in China and ahead of the official announcement, the alleged specifications as well as photos of the phone have popped up online. The newly leaked photos are in line with what we have previously heard about the phone. The images show the waterdrop-style notch as well as the triple rear camera setup on the back of the smartphone. Separately, a number of teasers shared by Huawei have revealed that the company will be launching two more devices alongside the Enjoy 9S next week – Huawei Enjoy 9E and Huawei M5 tablet.

As per a number of alleged Huawei Enjoy 9S renders published by MySmartPrice, the phone will be released in at least four colour options – Red, Blue, Gradient Blue, and Black. The leaked renders also show a fingerprint sensor on the back of the smartphone alongside the triple rear camera setup with an LED flash.

In terms of the specifications, the phone is said to be powered by HiSilicon Kirin 710 SoC, paired with 4GB of RAM and 64GB of onboard storage, which is expandable via a microSD card slot (up to 512GB). Additionally, the phone’s rear camera setup will reportedly house a 24-megapixel primary sensor, a 16-megapixel secondary sensor with a wide-angle lens, and a third 2-megapixel sensor. The front shooter is said to be packing an 8-megapixel sensor. Additionally, the phone will feature a 3,400mAh battery and a 6.21-inch full-HD+ (1080×2340 pixels) display.

A previous leak has also hinted at an 128GB storage variant of the phone as well as the presence of EMUI 9.0 based on Android 9 Pie. 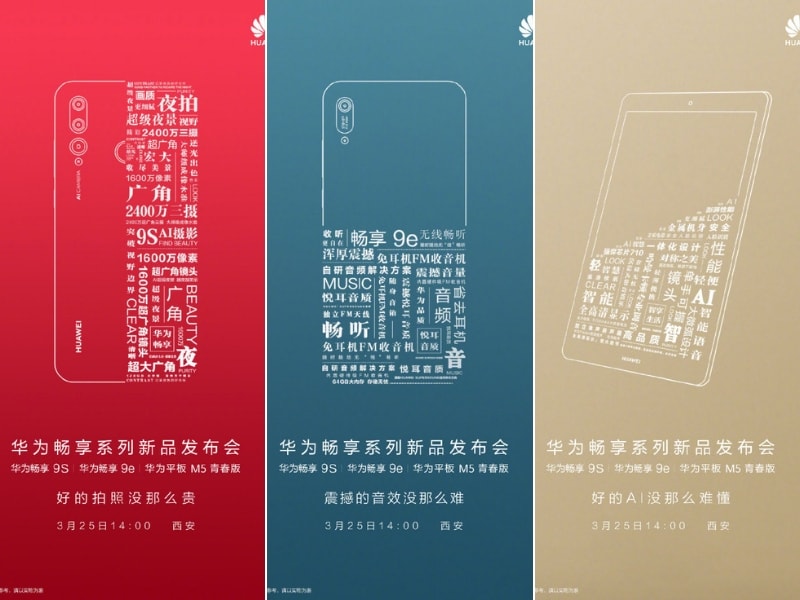 As we mentioned earlier, in addition to the Enjoy 9S, Huawei will also be launching two more devices – Enjoy 9E and Huawei M5 tablet, the company has revealed in three official teasers. The specifics of these two devices are unclear at the moment, however the Enjoy 9E teaser indicates that the phone will be music-focused and pack 64GB of onboard storage, and FM radio. On the other hand, the Huawei tablet will be powered by Kirin 710 SoC and pack some AI-powered features. Also, the Enjoy 9S teaser seems to confirm the leaked camera specifications of the phone.

There is no word on whether any of three upcoming Huawei devices will be released outside China. We are hoping to learn more on Monday when these become official.