The Honor Band 4 Running Edition is a stripped-down version of the Honor Band 4. Is a fitness wearable without GPS and a heart rate sensor going to be useful for runners? We used the product for around 10 days to find out.

The Honor Band 4 Running Edition can be used in two modes — wrist and foot. It has a tiny 0.5-inch OLED display on a capsule. The capsule has one capacitive button that you can tap to scroll through various data points (distance, sleep, calories, etc.). You can press and hold the button to launch certain actions such as restarting the device or beginning to log a running workout. The Honor Band 4 Running Edition ships with an adapter that can be used to charge the device.  The adapter connects to the band using a proprietary port, but the other end is regular USB, so you can charge the device easily any standard USB charger or a PC.

To use the Honor Band 4 Running Edition in wrist mode, you just need to slip it into its strap. We found it to be pretty loose, and sure enough, the Honor Band 4 Running Edition’s capsule slipped out of the strap on its own a couple of times. Even otherwise, we just had to bend the strap slightly a few times to make the capsule slip out. This lacks of a secure fit can be a problem for people who use it while exercising. 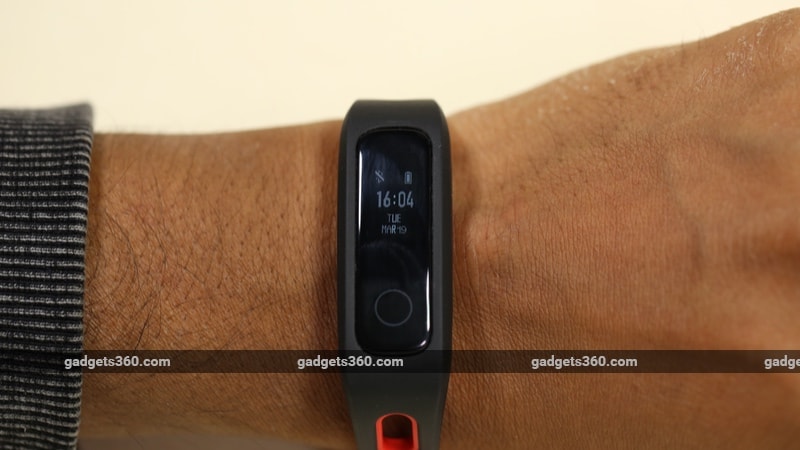 Other than that, the strap is pretty comfortable. It has a bunch of holes on both sides for ventilation, preventing it from becoming uncomfortable during long workout sessions. The strap has a standard watch buckle, and this ensures that the strap will never fall off your wrist.

The Honor Band 4 Running Edition ships with an accessory that allows you to attach the capsule to your shoes. You just need to slip it under your laces and attach the capsule to it. The capsule snaps on easily and stays put. There are two metal contacts at the top of the capsule and two on the accessory. You need to ensure that both these contacts meet when snapping the pieces together for the Honor Band 4 Running Edition to automatically switch to foot mode. It will vibrate to let you know that this has happened.

It’s important to note that it is possible to attach the capsule the wrong way. We would have liked a mechanism designed to fit only one way, but if you do accidentally misalign the capsule, at least you’ll know it by the lack of the vibration. 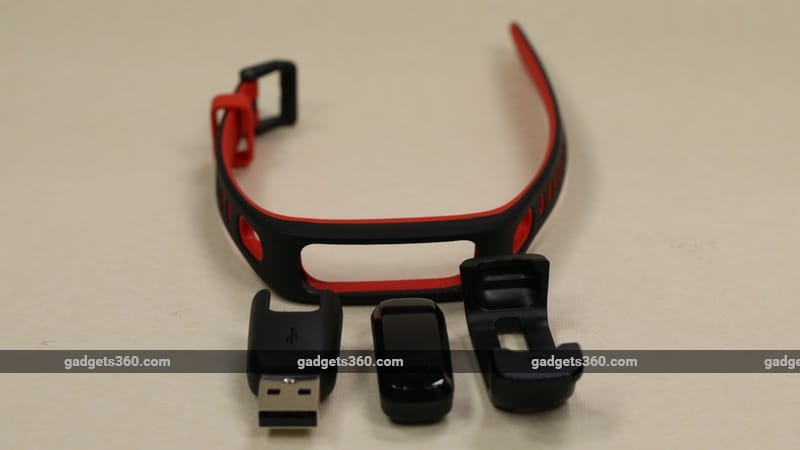 This is compounded by the fact that if you wear this device on your wrist, you cannot actually track running workouts; you can only use it to measure steps. Once you switch to foot mode, it allows you to start or stop tracking a running workout. When you do that, you can only see the distance covered and the time taken. We think the Honor Band 4 Running Edition should allow people to see the number of steps taken even when logging a run. It does record this data, but you cannot see it until you switch back to wrist mode or check the app on your paired smartphone.

If you’re looking for an affordable running tracker, the Honor Band 4 Running Edition won’t disappoint you. We went for a 1km run near our office with the tracker attacked to one of our shoes to test how accurately it can measure distance.

We’ve measured this route via the odometer on a car and know that it’s 1km long. Even though it doesn’t have GPS, the Honor Band 4 Running Edition showed the distance to be 1.04km at the end of our route. That’s more accurate than most GPS-enabled devices that we’ve tested, and marginally worse than the best ones, which show this distance to be 1.02km or 1.03km.

It’s good to see that this product is claimed to be waterproof (up to 50m) because if you accidentally step in a puddle or want to go running during the monsoon, there should be nothing to worry about. Honor recommends that you avoid exposing this product to sea water to avoid corroding the metal contacts. During our review period, we wore the Honor Band 4 Running Edition on our wrist while showering multiple times, and also dunked it in a bucket of water. The tracker survived. 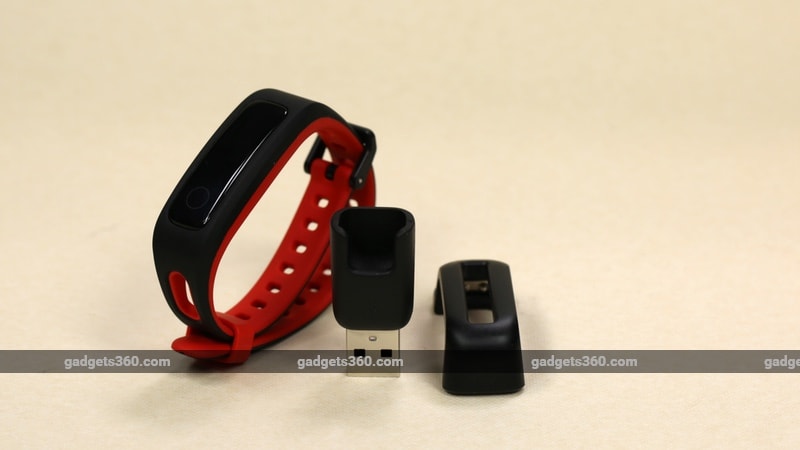 Honor claims that this product has a battery life of up to 21 days, but with notifications enabled, we found that the battery ran out in eight days. This won’t bother most people, but we think it’s on the lower side given the limited functionality of the Honor Band 4 Running Edition.

The Huawei Health app — companion app to the Honor Band 4 Running Edition — shows data that you won’t get with most other fitness trackers. For instance, based on our run, the app suggested that we could reduce ground contact time and avoid landing on our heels to improve running form and reduce injuries. The analysis appeared to be spot on, as we do tend to land on the heel.

The high ground contact time basically means that we were landing heavily while testing the Honor Band 4 Running Edition’s foot mode. That’s accurate too, because this test was conducted right after we finished a relatively fast 1km run in the heat, which means we were tired and almost dragging our feet.

The app shows data from previous workouts in neat bar graphs, and we think it’s pretty nicely designed. You can use the Huawei Health app to track location during workouts (using your phone’s GPS) if you wish, but there are several other apps that do this better than Huawei Health.

Once you pair the Honor Band 4 Running Edition with your smartphone, you’ll be alerted with a vibration and an icon on the device’s screen when you receive a phone call or an SMS. You can set alarms via the app as well. These functions work just fine, but the tiny screen of the Honor Band 4 Running Edition is a big limitation. We’d have liked to see who is calling or texting us, and a bit of the text of a message, to see if interruptions are important. 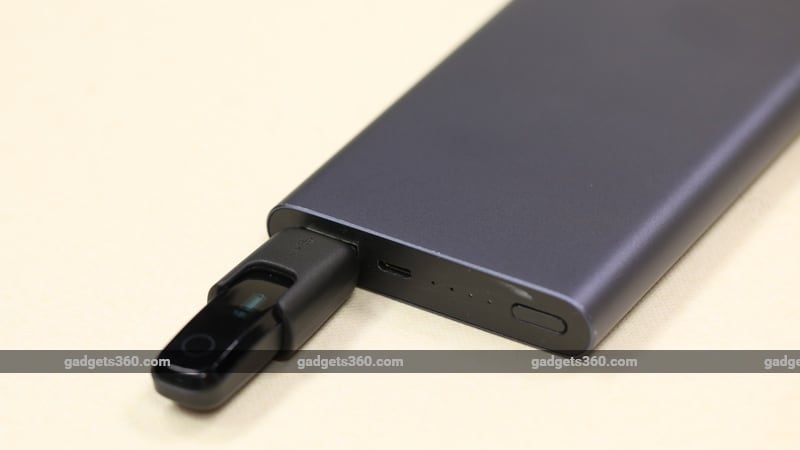 Verdict
The Honor Band 4 Running Edition is one of the few activity trackers in the market that can be attached to your shoe for accurate running data. It does this really well, and if you’re going to be using only as a running tracker clipped to your shoe, then it’s a good choice. However, if you want a more general-purpose fitness tracker, then its limitations might seem rather striking.

It doesn’t have a secure fit in wrist mode, its notifications are practically useless, step tracking isn’t the best, battery life is just average, and basic features such as a heart rate sensor or even the ability to use your phone’s GPS are lacking. It doesn’t track any other form of exercise either.

Priced at Rs. 1,599, we think the Honor Band 4 Running Edition doesn’t offer the best value for money based on its feature set. It’s best used in foot mode, and even though it’s good at what it specialises in, we think the functionality overall is too basic for the company to charge this much. Unless you really need a running tracker that you can attach to your shoe, we think that you’d be better served by the Xiaomi Mi Band 3.

Ratings (out of five)

OnePlus Band has been launched in India as the company’s first wearable device. The new ...