Just two weeks after Nikon announced its full-frame mirrorless cameras, the Z6 and the Z7, Canon has officially unveiled the EOS R, which is its first ever full-fame mirrorless camera. The announcement was made at an event held in Tokyo, Japan. The camera has a new RF mount, which means we also have a new series of lenses that were also announced. The EOS R will be available in October for an estimated price of $2,299 (roughy Rs. 1,57,700) for just the body, which undercuts the Nikon Z6 and puts it more in line with the Sony A7 III. Canon will also be offering a bundle for $3,399 (roughy Rs.2,33,300) which comes with the RF 24-105mm F4 L IS USM kit lens.

The new EOS R boasts of a 30.3-megapixel, full-frame CMOS sensor with Canon’s famed DualPixel autofocus (AF) technology and its DIGIC 8 image processor. The ISO range is quite good too, ranging from 100-40,000, with 8fps continuous shooting and a maximum shutter speed of 1/8000sec. The camera also supports 4K video recording up to 30fps, 1080p recording up to 60fps, and HD recording up to 120fps. Advanced shooting modes like Canon Log, 4:2:0 8-bit recoding and 4:2:2 10-bit video output over HDMI are also supported. The camera also has a silent shooting mode but only for single frame shooting. Silent shooting in burst mode will be coming in the future via a software update. 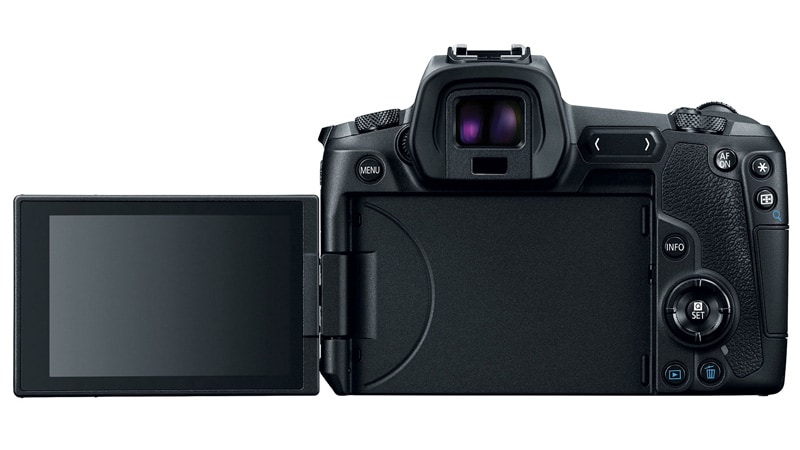 One of the major highlights of the EOS R is the massive 5,655 selectable autofocus points, compared to 493 AF points on Nikon’s top-end Z7 and the 693 AF points on the Sony’s flagship A9 full-frame mirrorless cameras. This should give the EOS R a big advantage when it comes to tracking fast moving subjects. You get a EVF with a 3.69 million dot resolution as well as a 3.2-inch fully articulating touch display with a resolution of 2.1 million dots. The new EOS R features a new touch bar right next to the EVF, which Canon says “allows users to more easily access their customizable settings, such as AF, ISO and white balance.”

The camera has built-in Bluetooth and Wi-Fi, a single UHS-II SD card slot, and a dust and weather resistant body that weighs around 580g. The EOS R will be compatible with all of Canon’s EF and EF-S lenses through the respective adapters. Canon also launched four lenses at the event, which include the RF 24-105mm F4L IS, RF 50mm F1.2L, RF 28-70mm F2L, and the RF 35mm F1.8 IS Macro. The company also announced a new app called Digital Photo Professional Express for the Apple iPad, which will let users edit CR3 RAW files on their tablet. This will be available in October.