The Amazfit Verge is a fitness-oriented watch from the Xiaomi-backed wearables company Huami. It slots in between the Amazfit Pace and the Amazfit Stratos fitness watches. The Amazfit Verge is priced at Rs. 11,999, can track several different types of workouts, and even allows you to make and answer calls (on Android only). We used this smartwatch primarily with an iPhone but also tested this Android-only feature using an Android phone to find out if this product is worth its asking price.

The Amazfit Verge, at 46g, is a lot lighter than the Stratos (around 60g). This might seem to be a small difference, but it’s a big deal for something you wear every day. The Amazfit Verge has a plastic body, a circular dial and just one plastic button on the upper right. This makes it feel almost like a toy watch, which is not good for a product that costs this much. The button behaves just like the home button on iOS, allowing you to exit any app and return to the watch face.

There is a microphone on the same side as the home button, and a speaker on the other side. The base of the watch has a heart rate sensor and the contacts for charging. The Amazfit Verge uses yet another proprietary charging cradle with a flawed design. The smartwatch snaps into it nicely, but you can easily push it in the wrong way around. Ideally the charging cradle should have pins both at the top and the bottom, or it should fit only one way. You also can’t access the button when the watch is in its cradle.

Another issue is that the cradle’s cable is not detachable. We’d have preferred the detachable Micro-USB cable that ships with the Amazfit Pace to this. It’s still a mystery why wearables companies keep shipping new types of chargers with every product.

The best part of the Amazfit Verge is its display. It’s circular, just like the ones on the Stratos and the Pace, but much better. The Amazfit Verge has an AMOLED display, which means that colours look bright and text is crisp. The display is legible under sunlight too. We think this is the best display on an Amazfit watch, and it makes a big difference when you’re tracking an outdoor workout and need to quickly check key statistics with a glance. 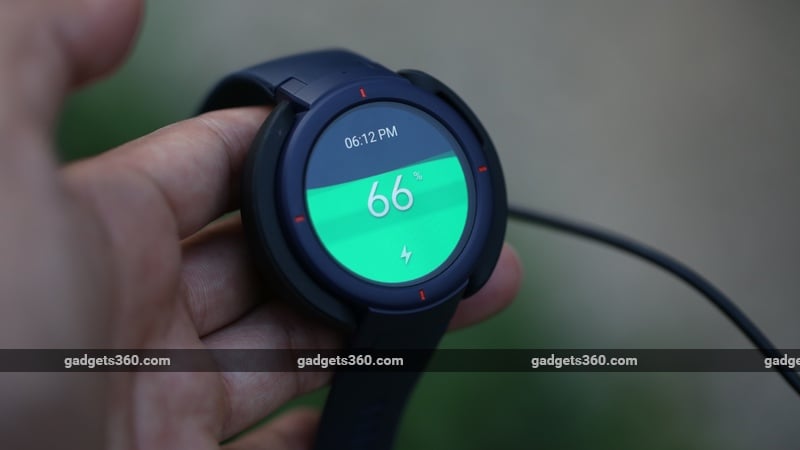 With that said, none of the watch faces on the Amazfit Verge really appealed to us. In our opinion, many of these try too hard to look like mechanical or digital watches, or use tiny fonts to cram too much information in too small a space. We think there’s a need for watch faces that make better use of the display on this device.

Huami’s proprietary Amazfit OS might be based on Android but it definitely isn’t anywhere near ready to be a proper smartwatch OS. You don’t get basic features such as the ability to install your own workout apps on the Amazfit Verge, and you can’t even sync data to Apple Health, Google Fit, or other apps.

The watch does a good job of showing you notifications but there is nothing you can do with them. You can’t reply to messages using the Amazfit Verge, or even interact with other apps for quickly sending a voice message, accepting calendar invites, etc. The “apps” on the Amazfit Verge are pretty basic — there’s a stopwatch, timer, heart rate readout, etc. to perform the core functions of the watch.

The Amazfit Verge is compatible with Android and iOS using the Amazfit app on these platforms. The app hasn’t changed much in terms of design since we reviewed the Amazfit Stratos, but it does have a few nifty new tricks.

You can now create custom intervals for workouts in the Amazfit app. This means that you can ask the Amazfit Verge to alert you if you exceed or fall below certain thresholds for time or distance. For instance, the Amazfit Verge allows you to do four 800m sprints at a pace of 4 minutes 30 seconds per kilometre. This feature is very useful for experienced runners. 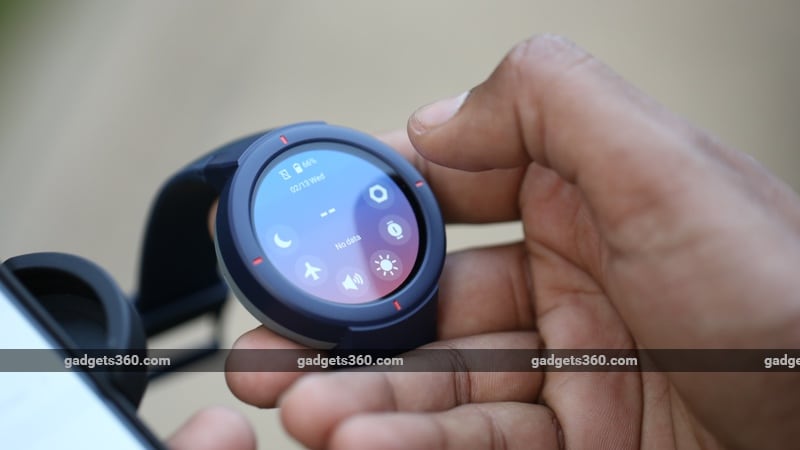 The Amazfit Verge supports phone calls (on Android) and notifications. You need to have your phone near you to be able for phone calls, but it’s still a good feature to have. You can make and receive calls via the Amazfit Verge and talk to people using the watch’s inbuilt microphone and speaker.

One big problem with Amazfit OS is that it can only handle one task at a time. If you are recording a workout, there’s no way for you to open another app. Let’s say you are at the gym logging a workout and you want to set a timer for a 1-minute plank, there’s no way to do that without ending the workout. This is a frustrating limitation that we ran into quite a few times.

Another shortcoming is the lack of a proper gym mode to track your strength training. You can track certain individual activities such as elliptical training and indoor cycling, but there’s no way to track multiple exercises in a single workout (think high intensity interval training or exercises with weights).

We ran a few standard tests to see whether the Amazfit Verge can measure distances accurately. The first is our standard step-tracking test where we walk 1,000 steps while counting manually. We performed this test four times, and the Amazfit Verge came up short. On average, it recorded only around 950 steps for every 1,000 we walked. This is below par, as we’ve tested trackers that cost around Rs. 2,000 that have delivered close to 100 percent accuracy in step tracking.

Our standard distance tracking test involves a 1km walk in along a route that passes under a flyover, which tends to confuse GPS tracking devices. We measured the distance using the odometer of a car to verify that it is 1km. Then we walked down the same route while wearing the Amazfit Verge. The wearable recorded this distance as 1.1km, which is about 10 percent off, and is not too bad. The most accurate GPS devices we’ve tested have recorded this distance as 1.02km or 1.03km, which shows that the Amazfit Verge is not too far off.

Unfortunately we found that the Amazfit Verge is a bit slow to latch on to a GPS signal. We tested this in multiple locations in Mumbai and noted that it took between two and four minutes each time. This can be frustrating, but we did note that once the watch caught a signal in a particular spot, it latched on almost instantly when we went back there later. 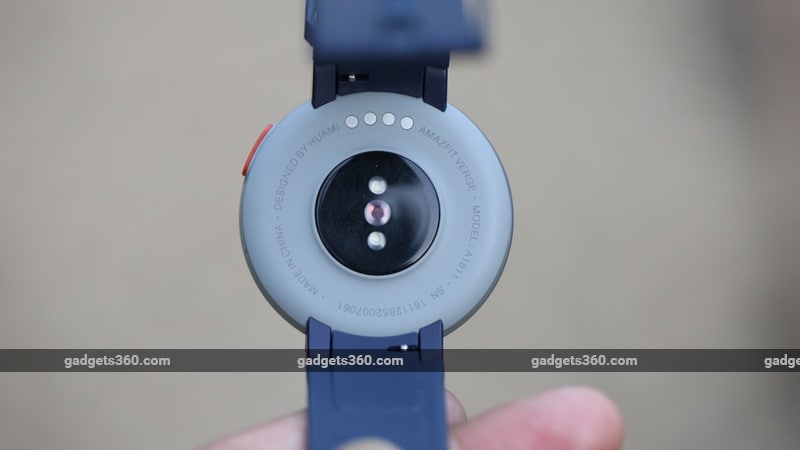 The Amazfit Verge is IP68 rated, but not swim-proof. We dunked it in a bucket of water and wore the watch while showering. In both cases, it continued working as expected.

The heart rate sensor on the Amazfit Verge was fairly accurate for the most part, using the readings from an Apple Watch Series 2 for reference. We tested this by logging multiple walks and runs.

The heart rate app on the Amazfit Verge doesn’t automatically start recording your heart rate. Tapping “Check now” every time you want to check your heart rate is a bit annoying. Thankfully, continuous heart rate tracking is enabled in all workout modes.

It also has automatic workout detection, and once the Verge detected a walking workout while we were on a brisk walk to office. A helpful prompt allows you to start logging the activity with one tap, which is a nice feature.

The battery life of the Amazfit Verge is pretty good. The watch lasted around four days on an average with moderate usage (one GPS workout per day and all notifications enabled).

Verdict
The Amazfit Verge offers a really nice display, some neat software tweaks for advanced workouts, acceptable GPS accuracy, and good battery life. Unfortunately, the list of issues we faced is a bit longer. We weren’t pleased with the inaccurate step tracking, the lack of good watch faces, the inability to easily sync workouts with third-party services, the poorly designed charger, and the lack of basic multitasking.

Priced at Rs. 11,999, the Amazfit Verge is best suited for people who want an affordable fitness watch with a nice display but aren’t too demanding about performance. This device might be one of the better options in the market at this price point, but that’s not a particularly high bar in the first place.

OnePlus Band has been launched in India as the company’s first wearable device. The new ...